Mud and stagnant water clog an alleyway in Manila, the capital.

On 30 September 2009 in the Philippines, over half a million people are displaced by flooding caused by Tropical Storm Ketsana (also known as Ondoy), which struck on 26 September. The storm dumped over a months worth of rain on the island of Luzon in only 12 hours. The flooding has affected some 1.8 million people, and the death toll has climbed to 246; both numbers are expected to rise as aid workers reach additional disaster areas. The Government has declared a state of calamity in Metropolitan Manila the capital city with a population of over 15 million and 25 other provinces. Power outages and mud-choked roads are slowing rescue efforts, and shelters report shortages of food, medicine and other essential supplies. Stagnant floodwater poses disease and sanitation hazards, and two other tropical storms are approaching the country, complicating relief efforts. UNICEF has responded by distributing hygiene kits, essential medicines, water purification tablets, portable toilets, blankets and soap, and is collaborating with the relief efforts of other UN agencies. UNICEF is also working to address the long-term needs of affected children by providing psychosocial support and planning for the rehabilitation of damaged schools. 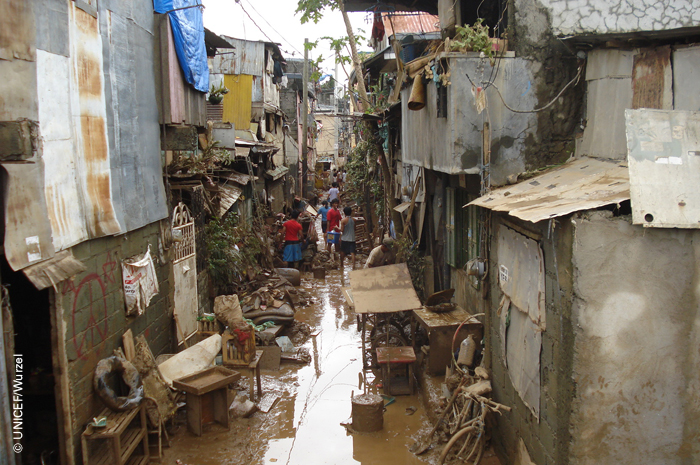